I honestly didn’t think I would be writing on this topic, but I just can’t stand it anymore.

I’ve noticed some scary similarities between recent political scandals. First off, the scandals surround sex; Bill Clinton, Rep. Mark Foley, Sen. Larry Craig, etc. Secondly, it seems that the scandalized politician was fairly hard core about passing legislation against the activity they themselves were engaging in.

Can we say “hypocrisy?”

So, I’ve decided that all the politicians in law making positions are practicing all the activities they’re trying to outlaw, and are in serious denial. People often hate in others what they hate in themselves.

From now on, I’m just going to assume that whatever a politician is against, they’re “guilty” of doing.

On a different note…why is the escort in the Spitzer case even being discussed? She was just doing her job when she was with Spitzer and accepting his money in exchange for sex. Sure, it’s illegal, but she wasn’t lying about she was up to. Spitzer, on the other hand, was trying to get anti-prostitution legislation passed by day, and screwing hookers by night. 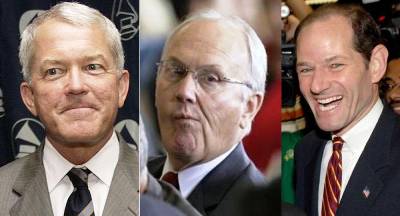 hypocrisy: a pretense of having a virtuous character, moral or religious beliefs or principles, etc., that one does not really possess.