There’s something rotten in the state of Denmark. Or at least in the Los Angeles prison system.

I can understand why celebrities serving jail time for non-injury DUIs are released early; just the humiliation of being behind bars can be punishment enough.

“That’s not early, that’s when he would normally be released, once you figure in good time and all that. When you calculate good time, which everybody that’s there that doesn’t get in trouble [is granted], they come up with a date, and we’ve known that date literally since the day that he went in. October 21 is the day that we expect he will be released, but that’s because of good time and all that.” MTV

Not only did Nick drive drunk, he participated in a drag race during which he crashed and very seriously injured his best friend John Graziano (he literally has a hole in his head!); basically ending John’s life and ruining the lives of those around him.

By the by, why wasn’t Nick Hogan ordered to pay each and every one of John Graziano’s medial bills??

Here’s what some of my friends and co-gossip bloggers had to say:

Of course he’s been on his best behavior. It’s kinda hard to act up when you spend the majority of your day curled up in a fetal position in the corner, sucking your thumb. A good day for Nick is being able to eat almost half of his dinner cookie before the other inmates steal it. He’s not exactly the type to stir @@@@up. [Celebslam]

Let’s imagine the homecoming party for Bollea or even just the parking lot at the jailhouse when he is released on Oct. 21st. The sun is shining and his mother, his sister Brooke Hogan and his daddy’s girlfriend, who could pass as triplets, are waiting for him together and he can’t tell which one is which – what will he do? Run Nick, run! Bitten & Bound

Not one to mince words, my good friend Mighty Mo weighed in on the topic and called it like she sees it:

“The early release follows standard procedures for all inmates.”

How much do you want to bet he won’t behave in a “standard” way by the privilege of early release? Asshole. Time will tell if that bad boy learned anytime from all of this. I seriously doubt it and I hope I’m wrong.

“I’m not sure where he’ll live. I think he’s going to do his own thing,” said [Brooke] Hogan, who was attending the anniversary party for Strike Miami, a ritzy bowling alley in Miami.

So Nicky’s gonna go do his own thing, which shows just how much sensitive and compassionate this family is. Let’s not forget, wasn’t Nick talking to his [poor excuse of a] father about doing a REALality show where he can make the most money??????????? Asshole.

Two weeks before the car accident, Nick Bollea was ticketed for driving that same yellow car 82mph in a 45mph zone. That’s almost twice the speed limit! The photo below is a still from the dash-cam video that day. 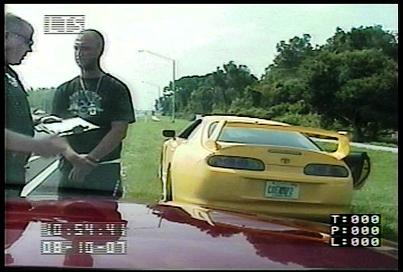