I saw Madonna on Saturday. Yeah, I know I’m cool – try not to be too jealous.

I had a really great time and wouldn’t trade the experience, but I must admit I was a tad bit disappointed. Don’t get me wrong, seeing Madonna live was beyond amazing and it’s a memory I will always cherish; it just wasn’t what I was expecting, I guess.

My boyfriend (the one who remains nameless) put it well when he said that for someone who is so much about focusing on herself, the show was really visual with lots of action on the screens and not a lot of ‘all about me’ moments.

I was also caught off guard that she changed a bunch of her old songs to sound rock and not pop – which at the time they came out, they were. I don’t know, it just sounded weird to hear them so loud and heavy.

It was however, great to hear the old songs and remember how I felt when they first came out and how now I can die a happy concert goer ‘cause I’ve seen everyone I wanted to see before I died.

Although spectacular, Madonna’s dance routines were at times awkwardly youthful and clearly a means to showcase how fit she is for a woman her age. It was like she was saying, “Look at me; I can jump rope and sing at the same time. And wrap my leg around someone’s head.” Don’t misunderstand, Madonna is thrilling to watch and can still move with the best of them, but she is getting up there in years and I don’t think it would be unacceptable if she took it down a notch. I’m not saying she shouldn’t rock and kick ass, I’m just saying maybe she could embrace the wisdom of her age and just not try so hard to keep up with the youngsters. I feel the same way about Cher.

Wow, I just went back and read all that; it sounds like I had a really crappy time. I didn’t though, so don’t get the wrong idea. I have wanted to see Madonna in concert for as long as I can remember, and I finally got the chance, and it was awesome.

Sure, it may not have been what I was expecting, but it was Madonna for crying out loud! How can that possibly be a bad time? 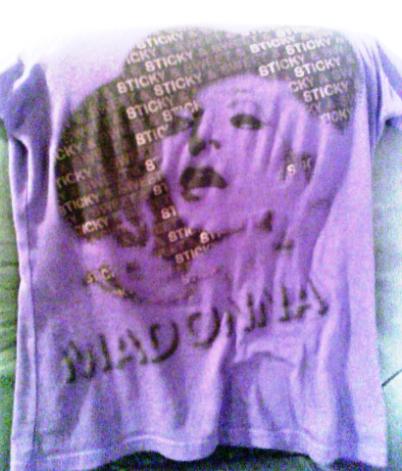