Out with the old, and in with the new – another decade come and gone.

I hope you all spend New Year’s Eve exactly the way you want to. Remember to party responsibly and don’t do anything stupid; it could very well end in death.

This year ends a bit differently than most – with a Blue Moon.

When there are two full moons in one month, the second of the two is called a Blue Moon. A normal year sees one full moon per month, but because the lunar cycle is only 28.5 days, there is a Blue Moon every two or three years.

In calculating the dates for Lent and Easter, the Clergy identify the Lent Moon. It is thought that historically when the moon’s timing was too early, they named an earlier moon as a “betrayer moon” (belewe moon), thus the Lent moon came at its expected time.

Folklore gave each moon a name according to its time of year. A moon which came too early had no folk name – and was called a blue moon – bringing the correct seasonal timings for future moons.

The Farmers’ Almanac defined blue moon as an extra full moon that occurred in a season; one season was normally three full moons. If a season had four full moons, then the third full moon was named a blue moon.

Recent popular usage defined a blue moon as the second full moon in a calendar month, stemming from an interpretation error made in 1946 that was discovered in 1999. For example, December 31, 2009 would be a blue moon according to this usage.

The term “blue moon” is commonly used metaphorically to describe the rarity of an event, as in the idiomatic expression, “once in a blue moon.” 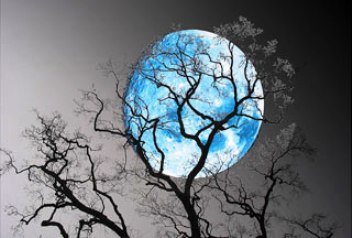