In her upcoming documentary “For The Record” airing on MTV Sunday November 30th, Britney Spears makes it quite clear to me that Britney Spears is still crazy.

When talking about having to be under the conservatorship of her father Jamie Spears, Britney said:

“I think it’s too in control. If I wasn’t under the restraints I’m under, I’d feel so liberated. When I tell them the way I feel, it’s like they hear but they’re really not listening. If you do something wrong in your work, you can move on, but I’m having to pay for a long time. I never wanted to become one of those prisoner people. I always wanted to feel free.

“I think I’ve learnt my lesson now and enough is enough.”

And that sentence right there is how I know Britney Spears still has miles to go in her path back to pop star greatness.

You see, Bi Polar is sneaky in that it tricks the person with the disorder into thinking they’re cured and no longer need medication; they often complain that the pills make them feel listless and not their “normal” selves. The fact that Britney Spears sees this past year as nothing more than doing something wrong in her work shows me she still hasn’t really gotten it and has not fully accepted her disease.

“There’s no excitement, there’s no passion. I have really good days, and then I have bad days. Even when you go to jail, y’know, there’s the time when you’re gonna get out. But in this situation, it’s never ending. It’s just like Groundhog Day every day.”

I hate to break it to you Brit, but your Groundhog Day isn’t going to end any time soon. Oh, and that whole “no excitement” thing, yeah, it’s because you’re not manic – that wasn’t fun you were having, that was bi polar self destruction.

Clips from Britney Spears’ upcoming documentary, “For the Record” at In Case You Didn’t Know, here. 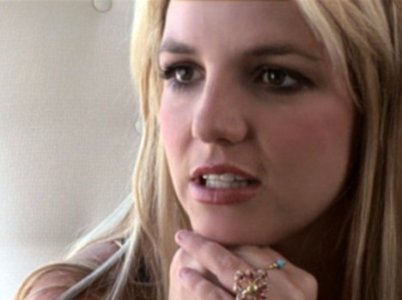 Source: Pop on the Pop