I got an email yesterday from William at Funny or Die telling me about a new video that Jerry O’Connell made along with is very pregnant wife Rebecca Romijn, with cameos by Jerry Minor and Perez Hilton.

Given the hilarity of Jerry O’Connell’s take on Tom Cruise (watch it here), I had to give this one a look. And I was not disappointed.

Entitled “Mystique and Me” the video shows what happens when Jerry O’Connell gets Mystique pregnant with a non-shape-shifting baby.

For those of you who don’t know, Mystique is the character that Rebecca Romijn played in the X-Men movies…..

Her true form is serpentine, having scaly skin and reptilian eyes but with combed-back dark red hair. She is also a nudist; while she can mimic the appearance of clothing using her powers, she chooses not to. She can transform herself into humans, humanoids, and human-shaped objects. [More about the comic book character Mystique HERE]

Jerry Minor was a featured player on Saturday Night Live for one season, from October 7, 2000 through the season finale in 2001. He was fired along with Chris Parnell by Lorne Michaels during the summer before the 2001–02 season because Michaels wanted to hire four new cast members, but did not want to go over budget. Minor is also credited as a writer for SNL. [More about Jerry Minor HERE]

Perez Hilton was born in Miami, Florida to Cuban parents who named him Mario Armando Lavandeira, Jr. Before beginning his blogging career, Lavandeira attempted a career as an actor. He briefly worked as a media relations assistant for LGBT rights organization GLAAD, was a freelance writer for gay publications, worked as a receptionist for NYC gay events club Urban Outings, and was briefly the managing editor of Instinct, a gay men’s magazine. He says he started blogging “because it seemed easy.” [More about Perez Hilton HERE]

Rebecca Romijn is due to give birth to twin girls sometime next month. Looks like she’s ready….. 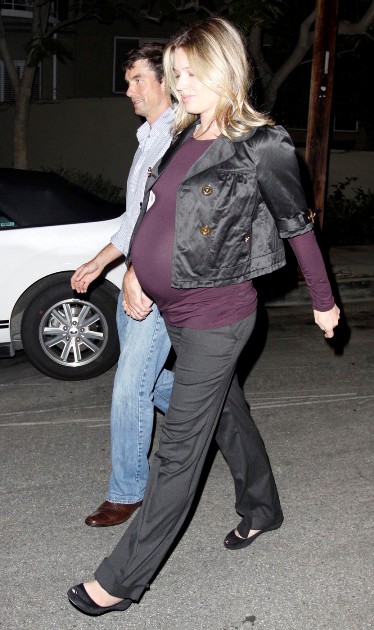