Home
Hollywood Gossip
Brooks And Dunn Are Calling It A Day

Another country music era has ended.

After 20 years together, the best-selling country duo Kix Brooks, 54, and Ronnie Dunn, 56, have decided to call it quits. But don’t worry, there’s no bad blood between them; they say it’s “just time.”

Brooks and Dunn announced their break up Monday on their website saying they’ve agreed to “call it a day.”

“This ride has been everything and more than we could ever have dreamed … We owe it all to you, the fans,” Kix Brooks and Ronnie Dunn said in the message. “If you hear rumors, don’t believe them, it’s just time.”

The duo isn’t disappearing anytime soon though – on September 8th of this year Brooks and Dunn will release a greatest-hits album, and will tour one last time in 2010.

The pair’s music label Arista Nashville says Brooks and Dunn have sold more than 30 million albums. Among their many hits are “Boot Scootin’ Boogie,” “My Maria,” and “Cowgirls Don’t Cry” with Reba McEntire.

Brooks and Dunn won the Country Music Association’s ‘vocal duo of the year’ award every year from 1992 through 2006, with the exception of 2000. In 1996 the CMA honored them with ‘entertainer of the year.’ 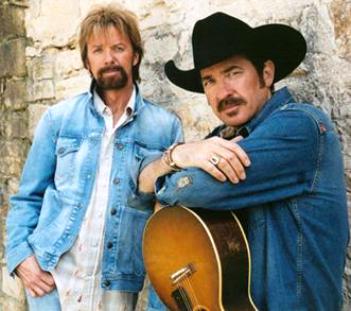