Gerald McCullouch, who plays ballistics expert Bobby Dawson on CBS’s CSI, drew on his real-life knowledge of boxing to take down a would-be mugger wielding a large kitchen knife.

The actor had just arrived at JFK Airport from L.A. when the incident happened.

“It was about 2 a.m.,” McCullouch said. “I have a place [in New York] now, so I take that train at least once a month. I was trying to reach my buddy, Keith Collins, who was having a party at Antik. But my iPhone died, so I took out my laptop to recharge it. I started working on a YouTube video I’d been editing on the plane.

“The train was pulling into the Utica Blvd. station when I noticed someone cross in front of me. Just as the doors opened, he reached for the laptop. I guess he thought he’d grab it and dash out the door, but I gave him a body shot to the chest.

“I don’t know why I did that except that I box three or four days a week and had just been in the ring about eight hours before. Also, I didn’t want to give up my computer after working on my video all that time.

“Well, that’s when he pulled a kitchen knife out of a black plastic bag. This thing must have had a blade 10 inches long. The other passengers started running out the door and into the next car.

“I still had my headphones on with music blaring. I yelled at the top of my lungs, ‘Get the [bleep] away from me!’ That’s when the knife came down into my back. I don’t know whether he lost his grip or what, but the blade didn’t penetrate my leather jacket.

“We were in each other’s face. I think I punched him again as the doors closed and the train started leaving the station. I’m watching MTA workers on the platform looking in. I thought, ‘Great, now I’m alone in this car with him.’

“The train was halfway out of the station when it stopped. I was saying stupid, cocky stuff, like ‘You are [bleeped] buddy!’ He came at me again with the knife. But the other passengers had told a conductor, ‘A guy’s getting stabbed in there,’ so the conductor came in and got me into the next car.

“Then about 10 cops jumped on the train and got the guy handcuffed on the floor. I told them the guy had a knife. They found it hidden under a seat or something.”

“We headed over to the 33rd Precinct. When I got there somebody said they thought this might be the same guy who stabbed two cops.

“All I know is that the police couldn’t have been greater. I signed a lot of autographs. I don’t know whether it was because of ‘CSI,’ but they gave me a lift to my place in Manhattan.’”

Thirty-nine year old James Torres was arrested and charged with robbery, menacing, assault, and criminal possession of a weapon. Now in Rikers, Torres has a court date of March 23rd.

Gerald McCullouch was mugged in Atlanta along with a boyfriend in 2001. “The cops never found that guy,” says McCullouch.

Wow. I wonder how long before we see this story on an episode of CSI. 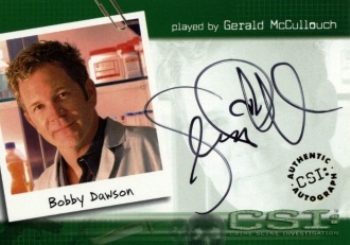