Margaret Mary Ray, who was best known as David Letterman’s stalker, was arrested on February 24, 1989 after being found inside David Letterman’s home and claiming to be the comedian’s wife. This was not the first time Margaret Ray got in trouble because of her obsession with the late night talk show host.

In 1988 Margaret Mary Ray was arrested while driving David Letterman’s Porsche, which she stole from his driveway; her 3-year-old son was in the car at the time. Ray told the cops that she was Letterman’s wife and that the boy was their child.

Over the next several years, Margaret Ray was arrested a total of 8 times for trespassing and other charges. She left cookies and an empty whiskey bottle in David Letterman’s home in Connecticut, and books and letters in his driveway. At one point Letterman found Margaret Mary Ray actually sleeping on his private tennis court.

After a brief obsession with retired Astronaut Story Musgrave and serving time in Florida in the early nineties, Margaret Mary Ray was released in August 1998. She settled in Hotchkiss, Colorado where she lived on Social Security disability benefits, and worked odd jobs.

On October 5, 1998 Margaret Mary Ray knelt on some train tracks in front of an oncoming train and committed suicide. 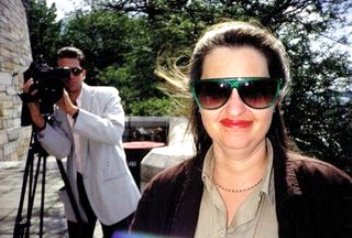