This might ruffle some feathers – which is why I’m going to say it – but I for one want Lindsay Lohan to go crazy and have a total breakdown.

I want her to go all out Britney Spears crazy – the shaved head, attack on a car with an umbrella, getting strapped to a gurney crazy. I mean come on now, how fun would that be? I get goose bumps of delight just thinking about it.

Looking back, Lindsay Lohan has pretty much been on the road to insanity for a a while now. Obvious and massive cocaine use, DUI arrests, sleeping around (probably); Lindsay’s been working hard at destroying herself for years.

Perhaps the events of last weekend will finally drive Lindsay Lohan into the town of crazy.

On Friday Lindsay was forcibly removed from a party for Samantha Ronson’s sister, at which Sam was DJing. Then on Saturday Samantha Ronson had someone change all the locks on her doors.

It was confirmed by Beverly Hills police that Samantha Ronson’s family visited the police station on Monday and inquired about getting a restraining order against Lindsay.

As of today, Lindsay Lohan has not gotten the hint.

E! News caught up with Lindsay and a friend at Rite Aid Beverly Hills, and when asked about life without Samantha, Lindsay nervously laughed then started to mumble.

“You guys make it sound like it’s so over. No. People take breaks. It’s okay. It’s normal, people. To focus on themselves.”

Gee Lindsay, who are you trying to convince?

But it’s okay, I don’t mind that Lindsay Lohan is in denial. It gives her a better chance of complete self destruction. 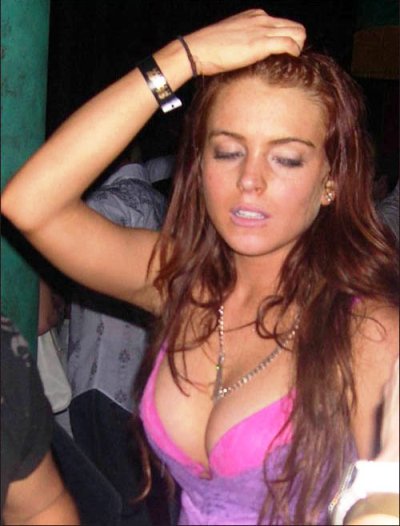