So uh, where do I sign up to be Chad Ochocinco’s friend?

On Monday’s Dancing with the Stars, the surprisingly light on his feet 32-year-old Cincinnati Bengals wide receiver surprised his dancing instructor and partner, Cheryl Burke, with a gigantic platinum ring with diamonds.

According to a source, the ring comes from Jason of Beverly Hills and cost the football player more than $10,000.

Professional dancer Cheryl Burke, 25, says before Ochocinco gave her the ring, he said to her “This is a token of my appreciation toward you!” Cheryl says it took her a minute to realize it was really real.

Cheryl says none of her partners have ever given her such a fancy gift, “not even any of my boyfriends have given me anything like this!” she tells Usmagazine. “Ochocinco likes the bling!”

So just how many carats is the flashy piece? “A lot!” Chad tells Usmagazine.

Ochocinco says he wanted to splurge on his partner because “she has to deal with me nine hours a day. It’s like a marriage, so why not give marriage gifts? I don’t spend time with anyone like this — ever!”

Cheryl and Chad earned 20 points for their Paso Doble on Monday night’s Dancing with the Stars. A pleased judge Bruno Tonioli squealed, “The power is back, the presence is back, the determination is back!”

“The dance was amazing,” Burke says. “He did everything I asked for, and he really came out with confidence. This was his dance. He did great, no matter what the judges say, and he gave 100 percent. He did nothing wrong.” 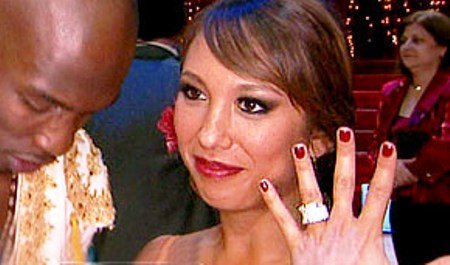