Did you catch The Family Guy last night? Brian went on a crusade to legalize marijuana; with the help of Stewie and musical numbers, of course.

“Everything is better with a bag of weed!”

The folks at the FCC must have been stoned when they let this one go by.

I found this on Gawker today. I couldn’t have said it better myself…..

Whoooo 4/20! The New York Times got high and celebrated early with a story on 4/19 about how all these hippies think the return of weed movies means anything for the legalization debate.

For fans of the drug, perhaps the biggest indicator of changing attitudes is how widespread the observance of April 20 has become, including its use in marketing campaigns for stoner-movie openings (like last year’s “Harold & Kumar Escape from Guantánamo Bay”) and as a peg for marijuana-related television programming (like the G4 network’s prime-time double bill Monday of “Super High Me” and “Half Baked”).

Guys, major media companies have been selling kids cultural products reflecting their illegal drug use for generations now. If you’re buying weed you probably have a bit of disposable income and a lot of time to kill! And yet: still illegal. Every adult in America has gotten high at some point, and everyone knows it’s completely harmless. But still illegal!

So hell maybe it will be decriminalized eventually, in your home town, if your home town is a liberal enclave of mostly white users. Baby steps! Happy 4/20! Good luck with fighting the drug war by magically reducing American demand, Barry! Maybe talk to your new employee Kumar about how to do about that?

Season 5 of Weeds is starting June 8th. Below is the official poster from Showtime. Season 4, by the way, comes out on DVD June 2nd. 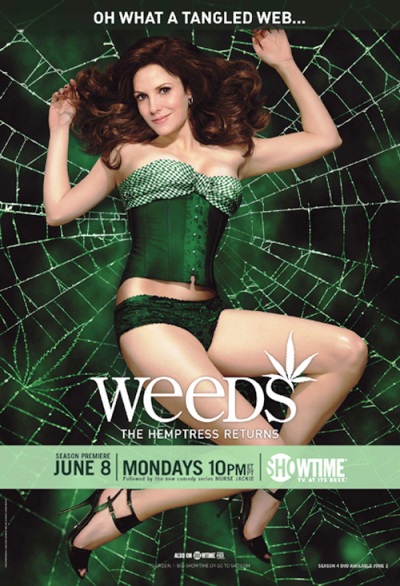