Note to self: Do not ask Michelle Rodriguez to be a bridesmaid.

I’ve always thought Michelle Rodriguez was a bit odd, but I didn’t realize that she’s bat-@@@@ crazy too, and apparently doesn’t like to share the spotlight.

Michelle Rodriguez’s manager Giancarlo Chersich married Dominican actress Celinies Toribio during a 4-day event. It’s being reported that during the bachelorette party, Michelle got out of hand.

Even before the party, they’re saying, Michelle was pushing “fully clothed guests into the pool.”

But things really got going when the stripper showed up for the bachelorette party. First Michelle Rodriguez called the male stripper “fat” then starting saying his man-parts left a lot to be desired.

Rodriguez was ticked off when the dancer asked for a volunteer at the beginning of his routine and then made the willing babe kneel down. “That’s bull[bleep],” the sexy star yelled. “He should be kneeling for her; this is a bachelorette party.” As the stripper began gyrating and pushing his crotch into the bride-to-be’s face, Rodriguez yelled, “This is the kind of thing that brings out the bisexual in me.” She left in a huff.

After the story hit the airwaves, a message was posted on Michelle’s MySpace page.

“Michelle did not ruin our wedding. She is our dear friend and a sister to us. We know that with her, plenty of fun will always be had. Everyone had a great time and nothing happened that offended us in any way. We both are so glad Michelle was able to attend and bring a lot of fun with her to our blessed day. We both love Michelle so much!
– Giancarlo and Celines” 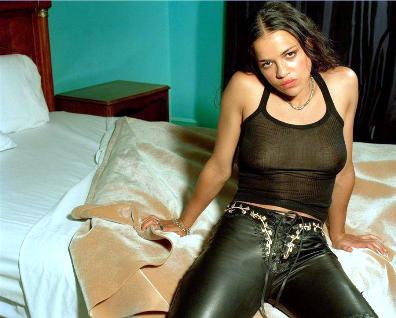