An infant boy married his neighbor’s dog in front of about 150 tribes people in an effort to prevent the child from being killed by wild animals.

Yes, that’s what I said.

The ritual was performed in hamlet in the state of Orissa’s Jajpur district after the boy, who isn’t even 2-years-old yet, grew a tooth on his upper gum.

The Munda tribe, of which the boy is a member, sees the early growth of the tooth as a bad omen and believes it makes the child prone to attacks by tigers and other wild animals. After the ceremony the tribal god blessed the infant to ward off evil spirits.

“We performed the marriage because it will overcome any curse that might fall on the child as well on us,” the boy’s father, Sanarumala Munda, was quoted as saying by a local newspaper.

The groom, Sagula, was carried by his family in procession to the village temple, where a priest solemnised the marriage between Sagula and his bride Jyoti by chanting Sanskrit hymns, a witness said.

The villagers then ate a feast with rich food and alcohol to celebrate.

In case you were wondering, no dowry was exchanged and the boy is still able to marry a human woman when he’s grown, without having to divorce the dog (haha, that’s a sentence you don’t hear every day). Indian law doesn’t recognize marriages between people and animals, but the ritual remains in tribal areas of the country.

The wedding of a child and dog seems a bit odd to me, but if it’s the way of the people who am I to judge? 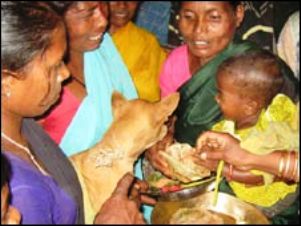