Home
Hollywood Gossip
KFC Double Down Sandwich. Not Too Sure How I Feel.

Someone in the KFC kitchen over in Louisville, Kentucky is either a stoner with a horrible case of the munchies, or a pregnant lady with really weird cravings. There’s just no other way to explain Kentucky Fried Chicken’s latest sandwich creation.

Currently being test marketed only in Nebraska and Rhode Island, the new KFC double down sandwich has bacon, both Swiss and pepper jack cheese, and of course KFC Colonel’s sauce – all between two fried chicken fillets.

Yes, you read that right – instead of bread there is fried chicken. 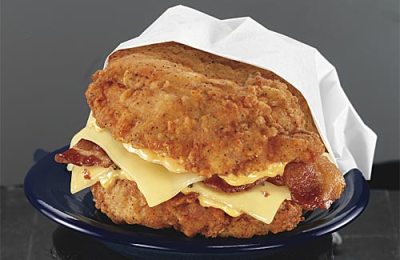 Gross. I can feel my arteries clogging even as I type this.

I had my friend watch the video (below) and then asked for his first reaction…..

“There’s bread on that sandwich. I don’t know who they’re trying to fool. Like, what part of breaded chicken means no carbs? The meal better come with a biscuit damnit.”

Well I thought it was funny.

The Colonel’s secret flavor recipe of 11 herbs and spices that creates the famous “finger lickin’ good” chicken remains a trade secret. Portions of the secret spice mix are made at different locations in the United States, and the only complete, handwritten copy of the recipe is kept in a vault in corporate headquarters. On September 9, 2008, the one complete copy was temporarily moved to an undisclosed location under extremely tight security while KFC revamped the security at its headquarters. Before the move, KFC disclosed the following details about the recipe and its security arrangements:

*The recipe, which includes exact amounts of each component, is written in pencil on a single sheet of notebook paper and signed by Sanders.

*The recipe was locked in a filing cabinet with two separate combination locks. The cabinet also included vials of each of the 11 herbs and spices used.

*Only two executives had access to the recipe at any one time. KFC refuses to disclose the names and titles of either executive.

*One of the two executives said that no one had come close to guessing the contents of the secret recipe, and added that the actual recipe would include some surprises.

On February 9, 2009, the secret recipe returned to KFC’s Louisville headquarters in a more secure, computerized vault. 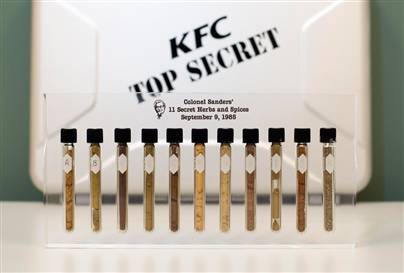