Tonight was the town hall style presidential debate between John McCain and Barack Obama. Perhaps you watched it. I tried to, but kept getting annoyed by John McCain’s slight limp and weird bodily ticks that he was desperately trying to hide and his camp refuses to address (stroke, anyone?).

Anyway, while I was trying to listen but not watch I found an interesting article from The New York Times. During the vice-presidential debate last Thursday, Sarah Palin shared with us – at least six times – that she believes John McCain is a maverick, even calling him “the consummate maverick” at one point. But she was using the word ‘maverick’ incorrectly and ended up making herself look silly, as well as pissing off a historical family.

… those who know the history of the word, applying it to Mr. McCain is a bit of a stretch — and to one Texas family in particular it is even a bit offensive.

“I’m just enraged that McCain calls himself a maverick,” said Terrellita Maverick, 82, a San Antonio native who proudly carries the name of a family that has been known for its progressive politics since the 1600s, when an early ancestor in Boston got into trouble with the law over his agitation for the rights of indentured servants.

In the 1800s, Samuel Augustus Maverick went to Texas and became known for not branding his cattle. He was more interested in keeping track of the land he owned than the livestock on it, Ms. Maverick said; unbranded cattle, then, were called “Maverick’s.” The name came to mean anyone who didn’t bear another’s brand.

Sam Maverick’s grandson, Fontaine Maury Maverick, was a two-term congressman and a mayor of San Antonio who lost his mayoral re-election bid when conservatives labeled him a Communist. He served in the Roosevelt administration on the Smaller War Plants Corporation and is best known for another coinage. He came up with the term “gobbledygook” in frustration at the convoluted language of bureaucrats.

This Maverick’s son, Maury Jr., was a firebrand civil libertarian and lawyer who defended draft resisters, atheists and others scorned by society. He served in the Texas Legislature during the McCarthy era and wrote fiery columns for The San Antonio Express-News. His final column, published on Feb. 2, 2003, just after he died at 82, was an attack on the coming war in Iraq.
Terrellita Maverick, sister of Maury Jr., is a member emeritus of the board of the San Antonio chapter of the American Civil Liberties Union of Texas.

Considering the family’s long history of association with liberalism and progressive ideals, it should come as no surprise that Ms. Maverick insists that John McCain, who has voted so often with his party, “is in no way a maverick, in uppercase or lowercase.”

“It’s just incredible — the nerve! — to suggest that he’s not part of that Republican herd. Every time we hear it, all my children and I and all my family shrink a little and say, ‘Oh, my God, he said it again.’ ” 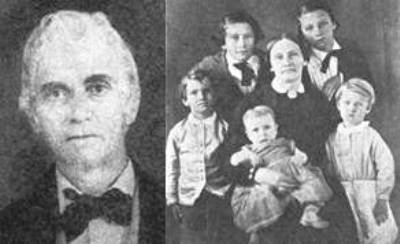