Once upon a time there was a prime minister from Spain named José Luis Rodríguez Zapatero.

He and his wife, Sonsoles Espinosa, considered themselves quite lucky because there’s a law in their country preventing the media from publishing any photographs of their daughters, 16-year-old Laura and 13-year-old Alba.

As a result of keeping their young daughters out of the papers, however, the country of Spain has never actually seen the girls and has no real idea of what they look like.

So it must have been a great shock to José Luis Rodríguez Zapatero, and his country, when the U.S. State Department took to Flickr and uploaded a picture of Spain’s first family with the Obamas – presenting to the world Laura and Alba – in all their Goth beauty.

No, seriously. Can you imagine? Having no idea what they look like then seeing this….. 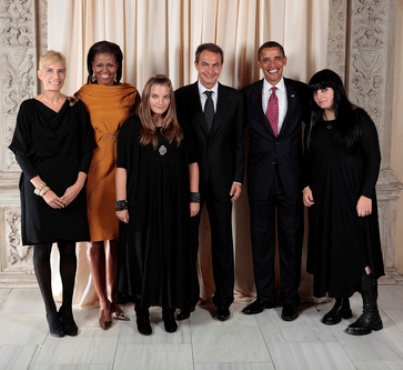 Personally, I think it’s totally awesome that a country’s leader has kids that are all Gothed out. Considering the tidbit of information below, I guess we shouldn’t be so surprised to see something alternative in the Prime Minister’s family.

The legalization of same-sex marriage in Spain on 1 July 2005 includes adoption rights as well as other rights that were previously only available to heterosexual couples. This caused a stir among others within the Catholic Church, which opposed the measures and supported a demonstration in opposition of over 166.000 – one million people in Madrid. In 2007, Zapatero’s government was also responsible for a Gender Identity Law that allows transsexual persons the right to have their identity legally recognized, the criteria being one clinical evaluation and two years of treatment (generally hormone replacement therapy), and without demanding mandatory genital surgery or irreversible sterility. The law is, alongside with the legislation of some US states, one of the most simple and non-bureaucratic that currently exist in the world. Transsexual persons also have the right to marry persons of the opposite or same sex they have transitioned into, and to biologically parent children either before or after transitioning. [source]