In 1991, an 11-year-old Jaycee Lee Dugard was snatched off the street as her horrified step-father watched in disbelief.

For 18 years she was held captive in a crap-hole tent compound in the backyard of Phillip and Nancy Garrido in Antioch, CA.

This past August the whole disturbing situation came to light after UC Berkeley campus police got the heebie-jeebies from Phillip Garrido.

In the months since Jaycee Dugard’s rescue – and the subsequent discovery and rescue of her two children said to be fathered by Phillip Garrido – there has been an obvious curiosity surrounding what Jaycee looks like now, as a 29-year-old woman.

Wednesday morning the exclusive first photo of kidnap survivor Jaycee Lee Dugard as she looks today will be was released on People magazine’s website People.com. It shows a grown up Jaycee with light brown hair and a huge smile.

Erika Price Schulte, a spokeswoman for Dugard’s family, told KCRA 3 that Jaycee Dugard wanted to do this in the most respectful way possible as a way to thank everyone for their outpouring of support.

Phillip and Nancy Garrido, who are accused of abducting Dugard, remain in jail in Placerville.

Dugard will also have a statement printed in People magazine, Schulte said. 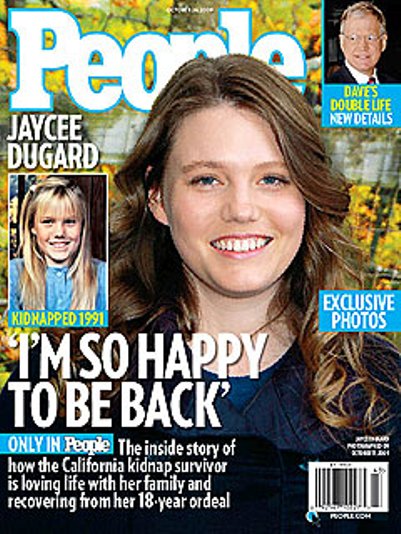