You know, there are some days when I feel really stupid and that I’m making bad life decisions. But then I find out what celebrities have been up to, and I realize I’m not all that dumb after all.

I’ve mentioned this sort of thing before – like back in April when we found out Jodie Sweetin got herself knocked up again.

Today we’re turning our attention to Jon Gosselin, who got a phat tattoo on his back yesterday to symbolize his alleged rebirth. The tattoo is of a Korean dragon holding a scroll in each claw with the names and birthdates of each of his eight children. And then there’s a ninth name – and it seems to be that of his latest girlfriend, Ellen Ross.

Her name is spelled wrong!

According to translators, it reads “Erin.” The letters “L” and “R” are similar in Korean, so some have interpreted the ninth name as Ellen. As in Ellen Ross.

…it’s a good thing Jon also got himself a new manager and a life coach. Clearly he needs some help with spelling, as well as financial decision-making.

First of all, it’s not only cliched to have Asian characters tattooed on yourself in an attempt to act hard, but how do you not make sure they’re translated right?

Oh Jon Gosselin…..you make me feel so good about myself. 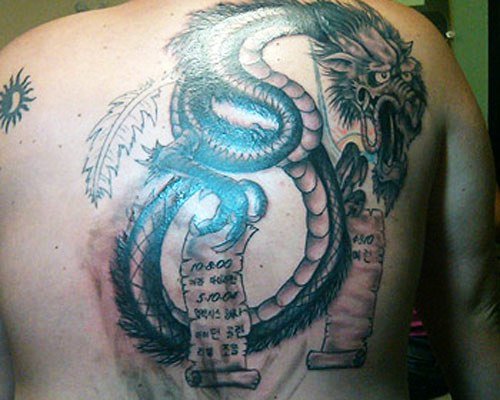