According to reports, Oprah Winfrey and the former headmistress of the talk show host’s Leadership Academy in South Africa have settled the defamation suit brought against Winfrey.

Now, a settlement isn’t admitting guilt – although that’s always a possibility – a settlement really just saves the celebrity from the embarrassment of a trial. And Oprah Winfrey certainly knows how trials can be, so I’m sure she just wanted to avoid all that drama.

Lawyers for both Oprah Winfrey and Lerato Nomvuyo Mzamane gave a statement to Entertainment Tonight on Tuesday.

“The two parties met woman to woman without their lawyers and are happy that they could resolve this dispute peacefully to their mutual satisfaction. Ms. Winfrey testified in her deposition that she did not intend the implications placed on her words by the plaintiff. Ms. Mzamane testified in her deposition that she has no evidence that Ms. Winfrey knowingly made a false statement about her or entertained serious doubt about the truth of what she said. We are pleased both parties have reached a conclusion.”

They met without their lawyers?? I didn’t even think that was allowed when celebrities were involved.

Mzamane sued Winfrey after she was dismissed following accusations that a dorm matron named Tiny Virginia Makopo had abused six girls at the Leadership Academy, according to the Associated Press. The AP reports that Winfrey said in 2007 that she had “lost confidence” in Mzamane as a result of the scandal. Mzamane claimed she had no knowledge of sexual abuse at the school, and had trouble finding a new job, according to the news agency. 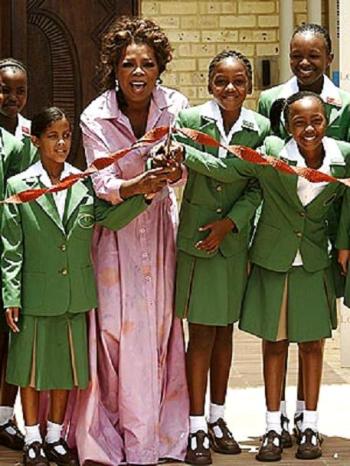