Ivana Trump was escorted off a plane on its way to Palm Beach last week because she was being a royal pain in the bootie.

First the 60-year-old ex-wife of Donald Trump got all pissy over her assigned first-class seat so the flight crew allowed her to move to a different first-class seat. Then a baby started crying, and even though Ivana was wearing headphones, she totally flipped out and began screaming profanities.

After yelling at the baby Ivana Trump turned her attention to the other children on the plane and loudly referred to them all as “little fu*kers.”

After the plane turned around and started to return to the terminal, Ivana continued her tirade, running past the cabin crew towards the cockpit.

Security was called in to remove Ivana Trump from the plane, but it proved to be harder than it should have been. After promising her another flight later in the day, security and crew were finally able to get Ivana off the aircraft.

You know, I don’t like crying babies on airplanes either, but I think there are better ways of dealing with the frustration than yelling and cursing at children. For crying out loud, the woman had a first-class seat – it’s not like she was stuck in coach surrounded by families and their seat-kicking children (speaking from experience, such a situation is an extremely hard thing to tolerate; especially when flying from San Francisco to London!).

Never let it be said that money gives you class. 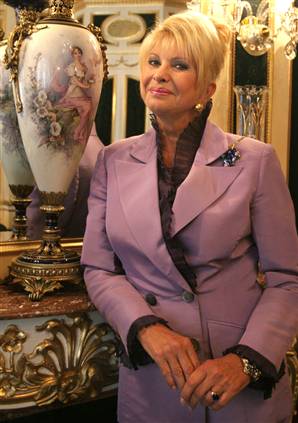