Is it just me, or has Michael Lohan been in the news more than his daughter Lindsay lately? He so must be getting off on it.

Sure, the elder Lohan is making it in the papers because of bad stuff, but hey, only no press is bad press in Hollywood, right?

Michael Lohan’s girlfriend, or fiancée, or whatever, Erin Muller is claiming Michael has physically abused her at least a dozen times in the last two years – including kicking her “in the vagina.”

These new allegations of violence at the hands of Michael Lohan have come out as a result of Erin Muller filing a request with the Nassau County, NY court yesterday to drop Michael’s harassment allegations he recently filed against her.

According to the documents filed by Erin, Michael Lohan abused her physically on the following dates:

Dec. 9, 2007: Michael Lohan “slapped Erin in the face twice” because Erin accused him of giving her a fake watch on her birthday.

Feb. 2008: Michael “punched Erin in the mouth” because she had a male friend on Facebook

March 2008: Michael “whipped a computer cord” at her face but she blocked it with her hand … causing a laceration.

May 2008: Michael “kicked Erin Muller in the vagina, bruising it and causing substantial pain.”

June 2008: Michael “spit in Erin’s face, and beat her repeatedly with his fist.” Then he “yelled at her to ‘stop crying c*nt — other people will see you — if they see you, I will kill you!’”

The apple certainly doesn’t fall far from the crazy tree in the Lohan family. 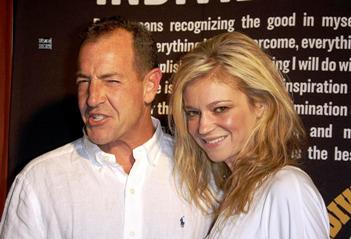