As if we didn’t already think he was a disgusting moron after watching him on the Real World: San Francisco in 1994, we now have another reason to classify David “Puck” Rainey as stupid.

Puck was in a car accident on March 19th in San Diego, CA and said it happened when he swerved to avoid hitting a deer that was crossing the road. The car flipped several times, leaving Puck’s 8-year-old son with several bruised internal organs, and himself with fractures to his neck, clavicle, sternum, right hand, and both feet.

Now police are saying that Puck may have been drunk behind the wheel at the time of the accident. Upon release from the hospital, Puck will be arrested and charged with driving without a license, DUI, and child endangerment.

So not only was Puck driving under the influence of drugs and or alcohol, his 8-year-old son was along for the ride. That’s despicable. 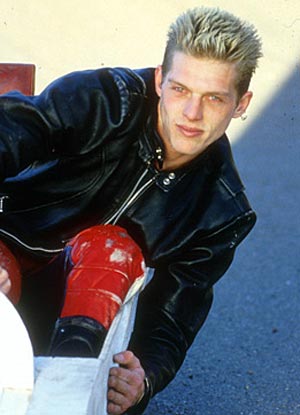 Rainey met his future wife, Betty, at a farmer’s market in 1998. They had a son, Bogart, and later married on Real World/Road Rules Challenge: Battle of the Sexes. They later had a second son, Rocco, and the family now lives in Alabama, where Rainey makes a living through public appearances and miscellaneous jobs. In his spare time, he enjoys gardening and photography, though he prefers to model, whereas his partner works behind the camera. [source]