Question: Does lots of money and a position on a professional football team put you above the law?

Answer: Apparently. At least some players on the Pittsburgh Steelers think so.

A woman in Florida is suing Pittsburgh Steeler Santonio Holmes, accusing the football player of attacking her in an Orlando nightclub.

Anshonoe Mills claims in the lawsuit that Holmes grabbed her face and threw a glass at her when he objected to her sitting on a couch in the Rain Night Club’s VIP section on March 7. Mills says the glass hit her and cut her near the eye.

The lawsuit also claims Holmes and a police officer intimidated Mills so she wouldn’t press charges.

Holmes’ teammate, quarterback Ben Roethlisberger, was accused earlier this month of assaulting a Georgia college student. He has not been charged. 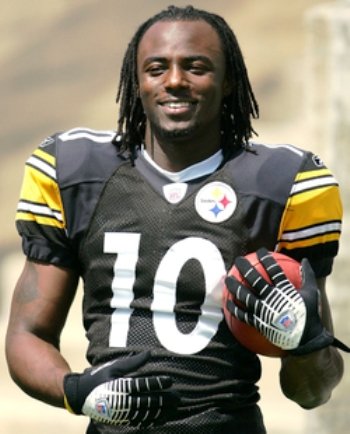 Santonio Holmes, Jr. is an American football wide receiver for the Pittsburgh Steelers of the National Football League. He previously played college football at Ohio State.

Holmes left college a year early and was taken in the first round of the 2006 NFL Draft. The 25th pick overall, he was the first receiver since Plaxico Burress taken in the first round by the Steelers. Holmes, who wore number 4 at Ohio State (a number that isn’t issued to wide receivers in the NFL), was issued number 10, previously worn in Pittsburgh by former kicker Roy Gerela and quarterback Kordell Stewart.