If Lindsay Lohan was lucid long enough for anything to set in, this might actually upset her a bit. But seeing how she’s most likely wasted 24/7, she’s probably totally oblivious to this little bit of news.

The poof-haired, loud mouthed Snooki of MTVs Jersey Shore rakes in more money for a single appearance than Lindsay Lohan does.

If that’s not proof of just how far Lindsay Lohan as fallen, I don’t know what is.

So how is it that a Reality TV Guidette with alcohol issues beats out a once great actress who is clearly in a race to the grave?

College Candy breaks it down:

Snooki will do cartwheels on the dance floor, show off her undies (or lack thereof) and beat the beat all night long.
Lindsay won’t be seen on the dance floor because she’ll be in the bathroom snorting a mysterious white substance off of a toilet tank.

Winner: Snooks, hands down! Who wouldn’t pay money to see a little (person do) bar gymnastics?

Winner: Snooks. We don’t go to the club to fight (unless there’s house music playing and we’re battling), we go to party. No on wants to pay to watch Lindsay get all Debbie Downer on us.

Snooki will be there rocking a corset and her giant-ass pouf on time, every time.
Lindsay most likely won’t show up. Or she’ll show up late. Or she’ll show up, fall, blame it on the paparazzi and then leave soon after.

Winner: Snooki. Again. She may not be credible for much, but at least we know she’s sure to show up and party.

The Princess of Poughkeepsie obviously brings much more to the bar table. Although we can count on both of them to be heavily intoxicated, fall down, flash their undies (or vajay-jays), and fight with strangers, at least Snooki will do it with some level of Jersey Shore composure. And will probably bring The Situation with her. 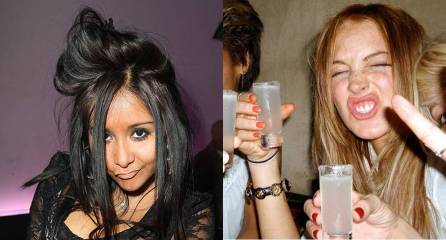