It was on this day in 1980 that Comedian Richard Pryor set himself on fire while freebasing cocaine.

During the making of the film Bustin’ Loose, Pryor was enjoying a little cocaine and 151-proof rum when he went up in flames. He ran from his Northridge, CA home down Parthenia Street until subdued by two cops.

Richard Pryor was taken to the hospital and treated for burns, which covered over 50% of his body. He spent six weeks recovering at the Grossman Burn Center at Sherman Oaks Hospital.

Pryor’s eldest daughter Rain Pryor (who was on Head of the Class, by the by) has stated that her father poured the rum over his body and set him self on fire while in the throws of drug-induced psychosis.

In 1982 Richard Pryor included a description of the freebasing indecent in his “final” comedy show Richard Pryor: Live on the Sunset Strip .

He joked that the event was caused by dunking a cookie into a glass of low-fat and pasteurized milk, causing an explosion. At the end of the bit, he poked fun at people who told jokes about it by waving a lit match and saying, “What’s this? It’s Richard Pryor running down the street.” 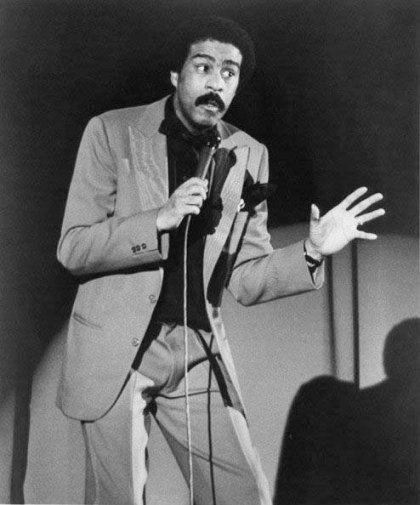 Richard Franklin Lennox Thomas Pryor III (December 1, 1940 – December 10, 2005) was an American stand-up comedian, actor, and writer. Pryor was known for uncompromising examinations of racism and topical contemporary issues, which employed colorful, vulgar, and profane language as well as racial epithets. He reached a broad audience with his trenchant observations and storytelling style. He is widely regarded as one of the most important stand-up comedians: Jerry Seinfeld called Pryor “The Picasso of our profession”; Bob Newhart has called Pryor “the seminal comedian of the last 50 years.”

I have no idea what or when this is from, but it’s friggin’ hilarious!