Get over yourself. There are worse things on television you should be worrying about – like Fox News! Just sayin’.

Besides, why are you letting your young children watch TV at 8:30pm on a school night? Don’t they have homework?

The Parents Television Council is up in arms over William Shatner’s new CBS sitcom “$#*! my dad says”, based on the Twitter account quips of the same name.

The Council sent 340 letters to companies that advertise on TV urging them to keep their distance from the TV show unless the title is changed; they argue that the show title is indecent.

“Parents really do care about profanity when their kids are watching TV,” said PTC President Tim Winter. “All parents? No, but something like 80 or 90 percent of parents. Putting an expletive in the title of a show is crossing new territory, and we can’t allow that to happen on our watch.”

Winter’s letter to companies asks bluntly: “When you advertise on television, do you want your customers to associate your product with shit?”

The Parents Television Council may be a little misguided, however, as actual parental concern about profane language on TV is diminishing.

According to the Rasmussen Reports pollsters, of the 1,000 American adults surveyed on July 27th and 28th, 57 percent said there was too much inappropriate content on television and radio. Sex and violence was their main concern, with only 9 percent of those polled saying profanity is the biggest problem area.

Take that PTC! You know who else doesn’t see a problem with the show’s title? The star!

“Do you know what I wish?” William Shater said. “I wish they would call it shit.”

“I’ve got grandchildren. I brought up three girls. They’ve all got kids. OK? And you say, ‘Boopy-doo-doo, you’ve got to make poo-poo. Come on. Make poo-poo in the toilet.’ Eventually, poo-poo becomes shit. ‘Go take a shit, you’ll feel better.’ You say that to your kids. The word shit is around us. It isn’t a terrible term. It’s a natural function. Why are we pussyfooting?”

Side Note: The Investigation Discovery network announced last week that it would be premiering a new series – “Who the (Bleep) Did I Marry?” – on August 25th. The nonfiction series follows couples in which one spouse has a shocking secret, such as being a robber or bigamist. Unlike Shatner’s show, the actual word ‘bleep” is used. 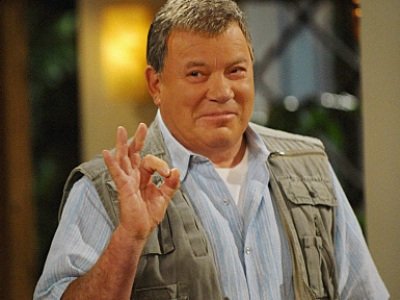