Home
Hollywood Gossip
Too Short In San Francisco At Club Mezzanine With A Band!

The boyfriend and I saw Too $hort at Mezzanine in San Francisco last night. Woot!!

With the exception of having to wait almost too darn long for Too $hort to take the stage with his “new” band, the night was a hit.

The show was opened by a young female rapper/singer by the name of Ariana Harris, who was quite good. On stage with her was another chick whose name I don’t know, and who was wearing some really horrible pants. They were totally and completely unflattering and looked like they were on backwards. On top of that, there was a pants pooch in the front which made it look like she was carrying a load. Very odd pants, indeed, but fashionable I’m sure. Sigh.

Next was the group Raw Deluxe, which consists of six white guys and two black dudes. They are a fun eclectic group – somewhere between hip hop, rap, and funk.

After their high energy performance, the DJ took over while we waited for Too $hort to take the stage. And waited. And then waited some more.

Finally Too $hort and his band appeared. I’m not really sure what I was expecting, but I know it wasn’t what I got.

What I got was a kick ass rap / rock performance by some extremely talented artists; one of whom was a chick who could totally flow and wail. I think her name is Silver, or Silky or something; I can’t remember (if you were there, can you tell me?). I thought she was friggin’ awesome but I don’t think the boyfriend was too impressed. He’s seen $hort a half dozen times so I think he was expecting a more “traditional” $hort performance.

Over all, I had a great night and I really liked the fact that it wasn’t totally packed with people so when I needed to, I could easily get away from people.

Oh, and neither the boyfriend nor I had a single adult beverage. Seriously. I think that’s a first for us.

And now we’re in Twain Harte, about to head over to Ironstone Amphitheater in Murphys to see Willie Nelson and special guest Leann Rimes. Talk about going from one end of the musical spectrum to the other!

Side Note: You know Too $hort’s pesky little arrest for misdemeanor battery in Boise, Idaho back in July? He says the accusations are untrue and exaggerated.

… a police report, the guards claimed the fight happened when the West Coast legend attempted to bring underage girls backstage. In a statement to XXLMag.com, Short Dog denied the allegations.

“The accusations against me regarding my arrest in Idaho on July 15th, were untrue and exaggerated,” he said. “Normally I would ignore rumors, but because of the nature of the story that’s being spread I had to say something. I don’t blame these outlets for running with the story because it’s about Too $hort the ‘dirty rapper’ who has never had a scandal and it involved the words ‘underage girls.’ However, due to my work with young people in Oakland I am extremely outraged at the way I am being portrayed. The incident that night was completely taken out of context and I have not and never will take advantage of any woman that is underage. Never that!

“These days people believe everything that they see on TV and these blogs,” he continued. “I have been dedicated to youth organizations and wish to continue to support them and I do not want my community and especially young people that look up to me to think that this is the type of thing that I would do.”

Judging from his behavior last night – he was quite polite and cordial, and even took time to explaine the different kinds of “bitches” in the world – I think I’m going to be on Team Too $hort for this one. But that’s just me. 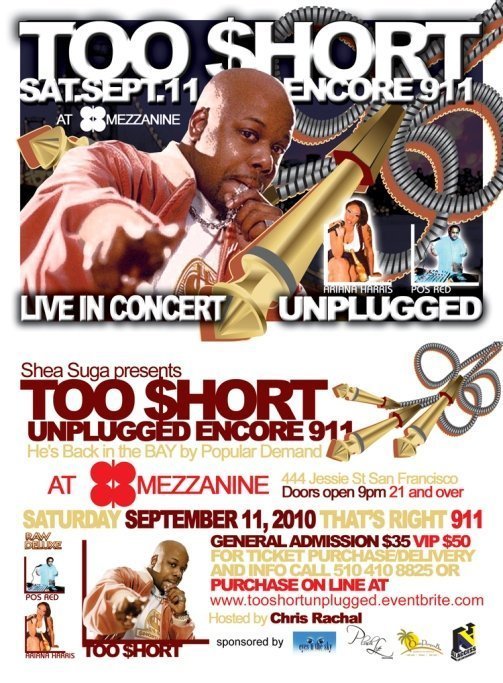