I think Michael Lohan has a couple valid points about Lindsay’s current stint in rehab.

That’s not to say that I don’t still find him to be a repulsive fame-whore douchebag – because I do – I’m just saying some of what the elder Lohan has to say is spot on.

Namely, that the main reason Lindsay Lohan is out of control is because of her dysfunctional family.

“The root of her problems is her family,” he says. “This will not work — mark my words!”

There’s no way to really know if Michael Lohan is speaking from a place of authentic concern or his unrelenting greed, but he’s got a good point regardless.

All the rehab in the world won’t mean a hill of beans if Lindsay Lohan doesn’t actually get to the root of the problem, and continues to hang out with the wrong people.

On September 28th Linday Lohan checked herself into the Betty Ford Clinic; it’s her fifth stab at rehab. She is due back in court on October 22nd to face Judge Elden Fox and answer to her latest probation violation.

It will be interesting to see what Judge Fox decides to do with Lindsay – jail or rehab. All I know is he better not let the bitch walk free.

Here’s picture proof that Lindsay Lohan is at the Betty Ford Clinic: 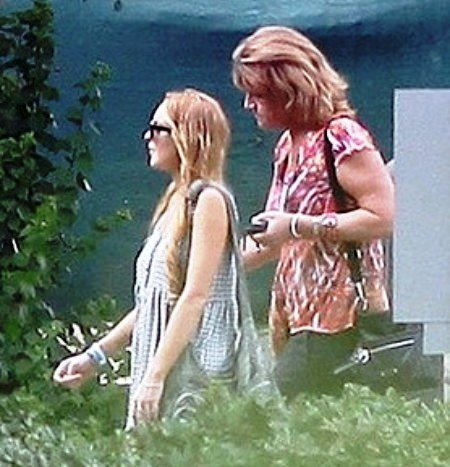