Here’s a little something to make you feel old…

Back to the Future just celebrated its 25th Anniversary!

“You’re walking in the street in Bhutan in the Himalayas and someone will go, ‘Marty McFly!'” said Fox.

“It’s so awesome. I mean really. The idea that we did something that people still want to celebrate, come out, have fun, show their kids and their grand kids. It’s a most gratifying experience,” added Thompson, who played Marty’s mom and brought her own teenage daughter along with her.

Not bad for a flick originally called Spaceman From Pluto.

The landmark building hosting the Back to the Future bash was decorated to look like the film’s clock, tower while partygoers marveled at a souped-up DeLorean parked out front, flux capacitor included.

“It’s great to have a film have a life and mean so much to so many people over so many years,” said Lloyd. “I’m very proud to be a part of this project.”

Did you know Eric Stoltz was almost Marty McFly? Apparently he wasn’t funny enough though, so in came Michael J. Fox. 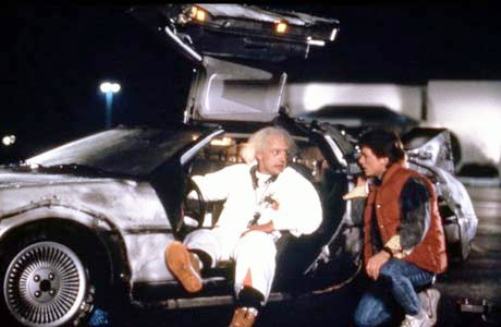