I think I’m going to be sick. Seriously.

Playboy tycoon Hugh Hefner has become engaged at the age of 84, to his so-much-younger-it’s-friggin’-beyond-disgusting 24-year-old girlfriend.

“When I gave Crystal the ring, she burst into tears,” Hefner posted on his Twitter account. “This is the happiest Christmas weekend in memory.”

“Yes, the ring I gave Crystal is an engagement ring,” he clarified later for those asking if it was merely a Christmas present or a step forward for the couple.

Hefner posted that he and Harris spent the night before Christmas watching a movie, then exchanging gifts. Hefner had a few for his girlfriend, which Harris Tweeted pictures of, including the legendary diamond Playboy watch.

His big gift was the engagement ring. It was a “memorable Christmas Eve together,” Hefner tweeted.

In related news – Las Vegas reports a horrendous screaming noise being heard around the city. It’s believed to be coming from Holly Madison’s apartment.

You know, once upon a time Hugh Hefner was the ultimate – now he’s just a creepy old man. 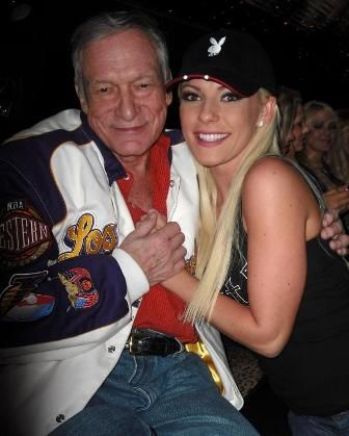 Crystal Harris was the third daughter of British entertainers, who worked at the England-themed amusement park, and present home to the19th century London Bridge, in Lake Havasu City, Arizona.

After Crystal was born, the family returned to England, before settling in San Diego, CA.