I know it’s not polite to laugh at people when they make asses of themselves, but sometimes it’s just plain funny and really deserves a huge “bwahahahahaha!!!”

Charlie Sheen’s “My Violent Torpedo of Truth” tour began Saturday night at the Fox Theater in Detroit, Michigan, and according to several accounts, it was a total bomb.

I guess his crazy act doesn’t translate to the stage.

During the rambling stage show, the 45-year-old actor was on the receiving end of audience boos and walk-outs; attendees were so displeased they demanded refunds in the middle of the show. One disappointed audience member even cried out, “You suck!”

Prompting Charlie Sheen to respond with, “Already got your f*cking money, dude.”

Linda Fugate, who paid $150 for a pair of tickets, told the Associated Press after she walked out of the show, “I want my money back!…I was hoping for something…I didn’t think it would be this bad.”

Fellow audience member Rodney Gagnon added, “I expected him to at least entertainment a little bit. It was just a bunch of ranting.”

After less than an hour, Sheen left the stage and the house lights were turned on.

The 20-city tour is scheduled for the rest of April.

More details and video at: Charlie Sheen — Bombed in Detroit on TMZ. 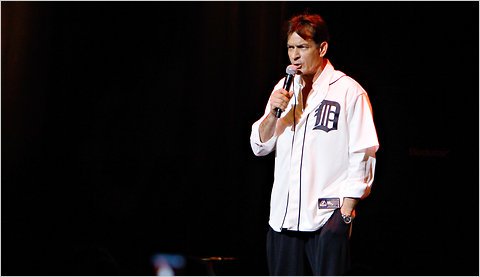