Scroll down for a disappointing – and totally expected – update…..

Lindsay Lohan has been released from house arrest. You have been warned.

That’s right folks; Lindsay Lohan has been released from her ankle shackle and is once again free to roam the streets. And get behind the wheel of a car, I believe.

At 9:15a.m on Wednesday morning, an employee of Sentinel Electric Monitoring by the name of Lupe Martinez, arrived at Lindsay Lohan’s house with the magical freedom key and removed her ankle bracelet. The newly liberated actress then signed a “house arrest completion form” which will be given to the L.A. County Sheriff’s Department.

According to friends, Lindsay had plans to leave her house around noon, with muffins in hand, and head straight to the Downtown Women’s Center to work on her community service.

Now that the home-confinement sentence for her probation violation is over, Lindsay must complete the 480 hours of community service related to the necklace theft, as well as enroll in a “shoplifters alternative class” (seriously), and submit to psychological counseling.

Don’t worry about your safety too much though, it’s seems as though Ms. Lohan is a little fearful of making an appearance outside of her home.

In fact, it’s being reported that the perhaps-reformed party girl is experiencing a bit of social anxiety and is afraid to leave her home for fear of the blood thirsty paparazzi.; preferring instead to spend her nights as she has for the last month – at home.

Be sure to place your bet on how long that will last!

UPDATE JUNE 30TH: It didn’t last long! Not only did Lindsay go out the very night she was released, she reportedly got completely trashed. Which of course was a horrible decision – even though she was legally allowed to do it. Lindsay Lohan Wasted Again! What a Hopeless D-Bag! – Fit Fab Celeb 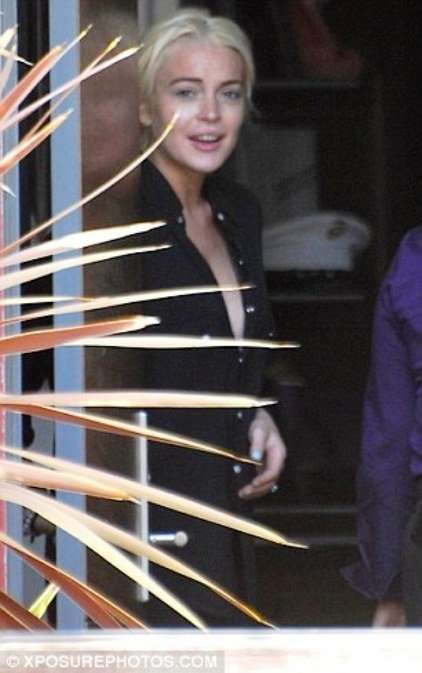