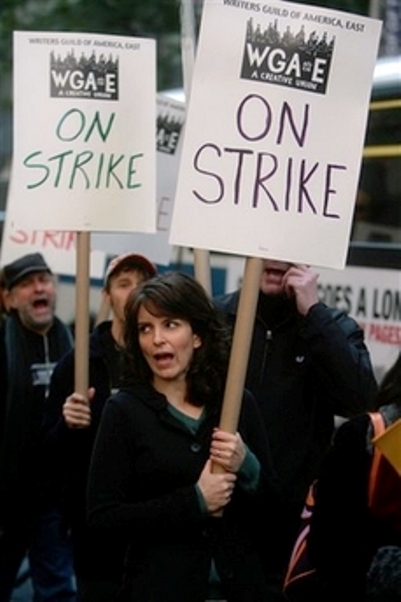 As I mentioned in my previous article, Hollywood Writers To Strike!, this strike could amount to something huge. It may seem like small potatoes on the surface, but Hollywood Writers on strike means no one is writing in Hollywood.

The strike is the first walkout by writers since 1988. That work stoppage lasted 22 weeks and cost the industry more than $500 million.

The first casualty of the strike would be late-night talk shows, which are dependent on current events to fuel monologues and other entertainment.

Daytime TV, including live talk shows such as “The View” and soap operas, which typically tape about a week’s worth of shows in advance, would be next to feel the impact. Hollywood writers begin strike.

…the majority of TV shows are actually run by writers, like ER’s John Wells, Scrubs‘ Bill Lawrence and Lost’s Carlton Cuse. And then there are the actor-writers, like Mindy Kaling, Paul Lieberstein and B.J. Novak on The Office. These WGA members are all finding themselves caught in the middle, as the studios have made it clear that they’re expecting them to fulfill their contracts while the WGA is calling for them to stand down. It’s Official: The Strike is On

Buzz about what’s going on at The Office. Rumors that the Teamsters are refusing to cross the picket line over at the studio there, and the show may shut down shooting. Word that both WGA members Steve Carell and Rainn Wilson did not show up today in support of the writers strike, so The Office had a short production day. On The Line: Strike News As It Happens 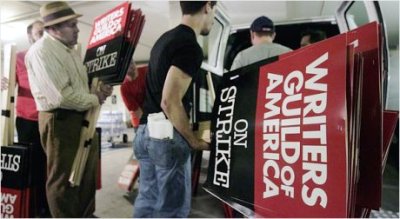