This just in, from Nikki Finke’s Deadline Hollywood Daily. Check the site often for up to the minute updates.

I just heard from a source attending tonight’s Writers Guild Of America general membership meeting that the exact timing of the writers strike will be decided tomorrow morning, then announced in the afternoon…

The WGA leadership said tonight it waited until the writers contract expired at midnight on October 31st to see if the Alliance of Motion Picture & Television Producers prez Nick Counter came up with a last-minute (and expected low-ball) offer — but he didn’t. So now the Hollywood writers walkout is a reality…

Writers going on strike may not sound like much, but under the surface, such an occurrence can affect everything from late-night talk show jokes to your favorite sitcom.

This is big, people! And it may get ugly. 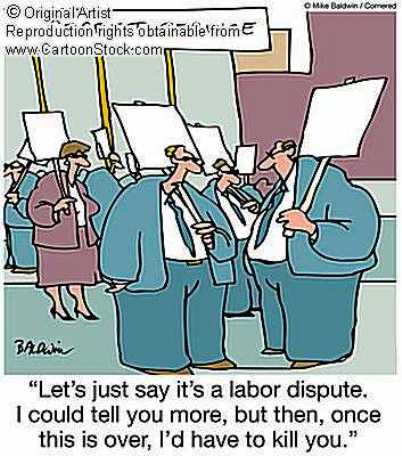 A little bit on Nikki Finke:

During her journalism career, Nikki Finke has been a foreign correspondent in London and Moscow for the Associated Press, a correspondent for Newsweek in Los Angeles and Washington D.C., as well as a Los Angeles Times staff writer.

Her credits also include being the West Coast Editor and Hollywood columnist for the New York Observer and later for New York Magazine, as well as writing for The Washington Post, The New York Times, Salon, Esquire, and Vanity Fair. Nikki has also made appearances on various TV and radio shows to discuss her business and industry of “Infotainment.”

Since 2002 Nikki has been a columnist for LA Weekly, writing about the culture, politics, and overall business of the industry in her “Deadline Hollywood” column.