Remember that guttural feeling of horror that came over you the first time you watched the movie Psycho and realized that Norman Bates was keeping the body of his dead mother locked up in his house? Yeah, well that’s how I felt when I read about the birthday party Frederic Prinz von Anhalt recently threw in honor of his wife, Zsa Zsa Gabor.

Call me crazy, but there’s something fishy about a party’s guest of honor staying in their bedroom all night. Perhaps it’s because I find Prinz von Anhalt to be a slimy creature, or maybe it’s because I’m fascinated by the macabre, but something just does not add up here.

In the past, von Anhalt has stated that Gabor wants the world to remember her as the great beauty she once was and thus chooses not to be seen by the public. I suppose I can buy that, but it’s far more fun to believe that Frederic Prinz von Anhalt has gone off the deep end.

Surrounded by paintings and photographs depicting Gabor when she was an infamously sassy Hungarian actress, a few dozen guests quietly sipped champagne and mingle in the common areas of the home overlooking the twinkling lights of Los Angeles.

But Gabor was nowhere to be seen – apparently celebrating her 95th birthday behind closed doors on the chilly Monday evening. Von Anhalt presented the cake to his bedridden beloved out of sight from the partygoers who had gathered for the occasion. He paraded it around the room as he greets his guests.

Proclaiming that the night was “a celebration of [his] wife’s life,” von Anhalt presented his party guests with pink wine, German dishes like schnitzel and warm pretzels, and topping it all off, a towering white cake with strawberries and decorated with hearts and the letters “ZZ” on each tier.

When asked why such a lavish party for someone not in the room to enjoy it, von Anhalt said that although Zsa Zsa was not aware of what was happening outside her bedroom door, she could feel the energy and the love.

I’m feeling something too. And it’s not love.

One of the last known pictures of Zsa Zsa Gabor: 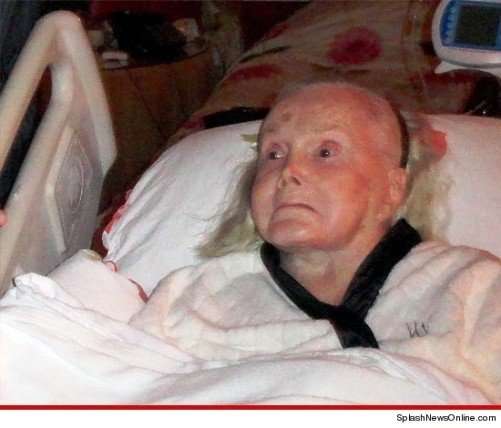