UPDATE: Prince To Staff: Whitney’s Welcome at My Shows! – TMZ

While it’s a known fact that Whitney Houston is currently in rehab for her continuing struggle with drugs and alcohol, there seems to be some debate over whether or not the troubled singer received a life-time ban from Prince concerts.

Rumor has it that Prince and his people have banned Whitney Houston from attending the singer’s concerts because of her erratic behavior and frequent badgering of the staff for free tickets. It’s also being said that Houston has demanded to be let up on stage at various shows, but that Prince’s people have refused to let her for fear that she would “embarrass herself.”

In a YouTube video uploaded by a fan last week, the 47-year-old singer was seen giving a wacky performance with Prince on stage. She sang a few lines and danced before Prince took the microphone back from her.

He then requested the audience to applaud, before firmly leading Whitney to the stairs to leave the stage.

Another video uploaded by a fan shows Whitney and her daughter Bobbi Kristina dancing over-enthusiastically in the audience at one of Prince’s shows.

Bobbi, 18, sings along to Prince’s songs as her mother holds her in a tight embrace, smiling at her.

Other audience members in the front row are still sitting in their seats, some looking unimpressed by the celebrity entertainment. 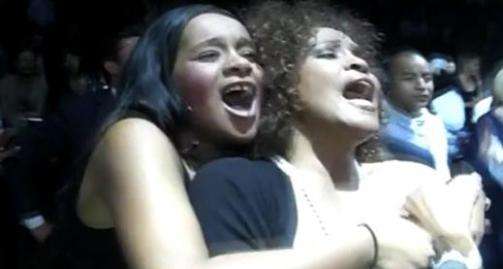