So the other day I says to myself, I says, “I wonder what ever happened to Lorenzo Lamas?” I mean, we see his plastic mcnasty ex-wife Shauna Sand gallivanting around town in next to nothing and her infamous clear stripper heals all the time. But where is the tanned man with the wavy shoulder-length hair? He’s got a mustache and soul patch thing going now – sort of a Yanni-esque deal.

Well you know, the funniest thing happened after I had the little Lorenzo Lamas where is he now conversation with myself.

I got my answer – in the form of a new reality TV show on the E! Network: Leave it to Lamas.

The show revolves around Shayne Lamas, who is most notably known as the winner of The Bachelor: London Calling on ABC; her engagement to Matt Grant ended two months later.

When asked about what a reality show might do to the dynamic of her family – given the track record of other relationship/family reality TV shows – Shayne Lamas said she thinks this show will actually bring her dysfunctional family closer together.

“The No. 1 deciding factor in doing this show was that we’d get to spend quality time with each other,” Lamas told The News.

“The second factor was my trying to get my brother and father to finally sit down and have a chat. We knew if we were all on board and there were photo shoots that they had to be at together, no matter what. They were going to be in the same room at some point.”

“There’s no more ripping apart that a reality show can do to us,” Lamas said. “It can only bring us closer.”

Leave it to Lamas, which premiered Sunday October 11th at 11 p.m., will move to its regular 10:30 p.m. time slot next Sunday. The half-hour long E! reality series follows Shayne and the rest of the Lamas clan, ex-wives and all. Joining Shayne Lamas will be her older brother A.J., along with their mom Michelle and father Lorenzo Lamas, as well as Shayne and A.J.’s younger half-sister Dakota Pike.

In the first episode, viewers learn A.J. and Lorenzo haven’t spoken for nearly five years, a conflict that resurfaces during filming when a tabloid story claims A.J. had an affair with Lorenzo’s fourth wife, Shauna Sand.

“We were just filming the first week and that magazine came out. Nothing was set up or faked,” Lamas said. “They’ve had a strained relationship for many years, for other reasons, and you’ll learn more about that on the series.”

“We are a family that is ultimately, at the end of the day, just like everybody else,” Shayne Lamas said. “We’re putting the truth out there about what’s going on behind our doors, instead of painting a fake picture. We come from a broken family and, in 2009, so do a lot of other people. As sad as that is, it’s reality, and we just want viewers to relate.” 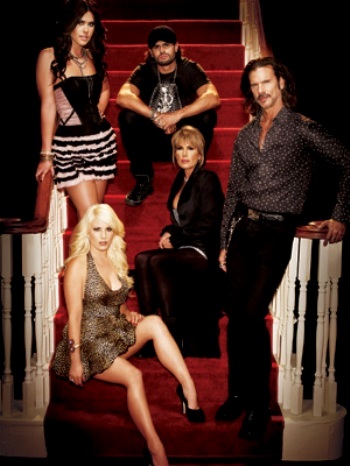