I’m not from the Central Valley and I don’t plan to stay here for the rest of my life, so generally the politics around here goes in one ear and out the other. I pay attention enough to know what’s going on, but I don’t put much thought or energy into a reaction. This coming election day, however, that changes. I will NOT be voting for Richard Pombo. I wish I could walk in there and just check a big NO POMBO box, but I will just as happily punch the little square in my ballot.

In October 2005, the St. Petersburg Times called him “a virulently anti-environmental congressman”. Just months later, in January 2006, Citizens for Responsibility and Ethics in Washington, a nonpartisan watch group, named Pombo as one of the seventeen most corrupt members of the House of Representatives. He made that list again in September.

Apparently, he does not understand the concept of preserving our natural forests, as he supported the (stupidly named) Healthy Forests Initiative, a move that would open 20 million acres of forest to logging and make it much harder for environmentalists to oppose logging. Richard Pombo also thinks it would be a good idea to sell 15 national parks to residential and commercial developers.

But it doesn’t stop at the land’s edge; Richard Pombo also wants to get his evil claws into the water. He supports and has pushed for drilling in the Arctic National Wildlife Refuge, despite concerns about the fragile ecosystem and opposition on all sides, even from his fellow Republicans.

To top it all off, during the 2006 Super Bowl weekend, Richard Pombo’s staff attempted to remove biographical information from the Wikipedia regarding his ties to Jack Ambramoff. High Country News, as reported by the Argus, a newspaper in California’s East Bay area, said that this act was not only and attempt, but and actual “scrubbing/sanitizing” from his Wikipedia entry. Luckily, they were unsuccessful. Check it out HERE 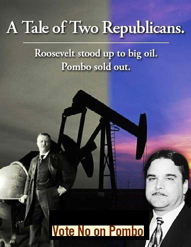