Joaquin Phoenix appeared on The Late Show with David Letterman last night. And by appeared I mean Joaquin Phoenix sat there being weird while Dave tried to get the actor to actually answer a question.

Phoenix was at the Ed Sullivan Theater to promote his new movie “Two Lovers” but in his messy black suit and tie with a heavy beard and black sunglasses, he seemed more interested in acting like Andy Kaufman than a talented actor.

Letterman, being the professional he is, poked a little bit of fun at Joaquin Phoenix and ended the segment with “Joaquin, I’m sorry you couldn’t be here tonight.”

From one crazy on a show to a bunch of crazies on another…..

Joanna Pacitti, an American Idol semi-finalist has been removed from the competition. Lots of people think this is good riddance since Joanna Pacitti’s past consists of a record deal with a major label, and songs on the soundtracks for the movies Legally Blonde and Nancy Drew.

In a statement late Wednesday, Fox Television said Joanna Pacitti’s disqualification was and effort to “avoid the appearance of impropriety.”

No one has pinpointed the exact reason for the disqualification but the stories in circulation blame her past as a recording artist, as well as the fact that she starred in a Broadway show. Oh, and that she’s good friends with American Idol executives Roger Widynowski and Michelle Young; both of whom she credits for helping with her career. Did I mention the three used to live in the same apartment complex?

Joanna Pacitti has been replaced in the semi-finals by Felicia Barton, a 26-year-old wife and mother from Virginia Beach, VA. Felicia Barton is far more deserving of the chance to win American Idol than Joanna is. Felicia Barton learned to sing before she could walk, and made her first public singing appearance at the age of two. 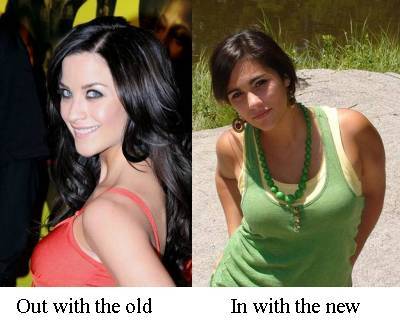