It’s British Invasion 2007! Soccer superstar David Beckham has signed a $250 million dollar five-year contract with the Los Angeles Galaxy. His current contract with Real Madrid will expire at the end of June. Before that, he was captain and key member of Manchester United.

In a statement released Thursday, Beckham said, “I am proud to have played for two of the biggest clubs in football and I look forward to the new challenge of growing the world’s most popular game in a country that is as passionate about its sport as my own.”

The hilarious people over at VH1’s Best Week Ever had these predictions to share after consulting with statisticians. What will come of the British Pop-Culture Royalty as they settle into the world of Los Angeles?

93% chance Tom Cruise starts to creep them out and they leave the church, only to find their lives ruined soon after. 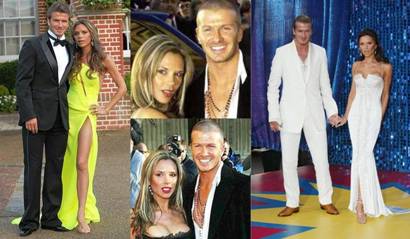 Once upon a time in Beckhamland…

In 1997, [David] Beckham started dating Victoria Adams, after she attended a Manchester United match. She was famously known as “Posh Spice” of the pop music group Spice Girls, one of the world’s top pop groups at the time, and [David’s] team was also enjoying a great run of success. Therefore, their relationship instantly attracted a great deal of media attention. The couple [was] dubbed “Posh and Becks” by the media. [David] proposed to Victoria on 24 January 1998 in a restaurant in Cheshunt, England.

[And married] at Luttrellstown Castle, Ireland on 4 July 1999.