So apparently my home computer needed to get its life in order. It decided to crash last night, and now needs to go to rehab. He’ll probably take the bed left vacant by Britney Spears. Anyway, I’m doing my best to get things up and running again (I’m writing this from my computer at my office job), so bare with me. 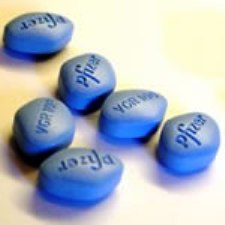 On this day in 1998 thousands of American men began to get their boners back, thanks to the FDA approving the wonder drug Viagra.

Sildenafil, the chemical name for Viagra, is an artificial compound that was originally synthesized and studied to treat hypertension (high blood pressure) and angina pectoris (a form of cardiovascular disease). Chemists at the Pfizer pharmaceutical company found, however, that while the drug had little effect on angina, it could induce penile erections. The reaction took about an hour, a little longer if the pill was taken after eating fatty foods. Seeing the economic opportunity in such a biochemical effect, Pfizer decided to market the drug for impotence. Sildenafil was patented in 1996, and a mere two years later–a stunningly short time compared to other drugs–it was approved by the FDA for use in treating “erectile dysfunction,” the new clinical name for impotence. History.com – This Day in History