I would love to list all the different hours for all the different stores open on Christmas Day, but that would take far too long and quite frankly, I’d rather sit on my couch and watch Scrooged with Bill Murray – my all time favorite Christmas movie.

So instead, I’ll just give you a heads up on some of the stores that are open on Christmas. As with most everything, Christmas store hours are not the same everywhere, so be sure to check with your local stores for their various Christmas Day hours. Or go by the stores sometime this week or next and see if they have their Christmas Day store hours posted.

It’s fairly safe to assume that the larger grocery store chains, like Safeway and Ralph’s, will be open at least until early afternoon. As will drug stores like Walgreens, CVS and Rite-Aid, and most liquor stores.

For those of you who wake up Christmas morning and discover you’re out of coffee – and lord knows you’ll need it that day – Starbucks will be open. Walmart is open on Christmas Day, along with K-Mart and Best Buy; that works out nicely for when you need to go buy a replacement toy and it’s electrical parts because the “some assembly required” really meant “you’ll get so pissed off with all the small parts that you’ll throw it against the wall smashing it to bits.”

If you’re traveling by air on Christmas Day don’t forget about the Airport Gift Shops. Sometimes you can actually find something pretty neat in there.

Hopefully the stars will align and you won’t have a need to go shopping on Christmas Day – of course, that would be an ideal day to miss the crowds – but if you do, now you know that all sorts of stores are open on Christmas Day.

I don’t remember so many places being open on Christmas when I was a kid. Is it for capitalistic reasons? Or are we more aware that not everyone celebrates Christmas? Or maybe they all were open and I just wasn’t paying attention because all I cared about was getting another something Barbie. 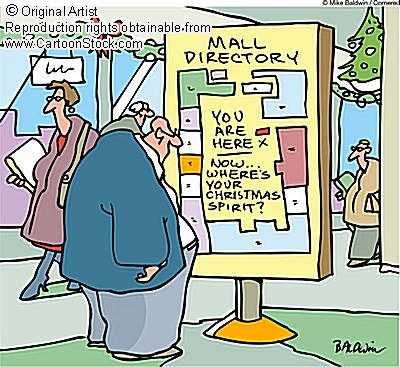