His father was a baker and a singer, his mother worked in a cigar factory, and he was one of the best tenors in known history.

Luciano Pavarotti died today at his home in Italy. He was 71.

In an email statement, his manager, Terri Robson, wrote, “The Maestro fought a long, tough battle against the pancreatic cancer which eventually took his life. In fitting with the approach that characterized his life and work, he remained positive until finally succumbing to the last stages of his illness.” More at Wikipedia 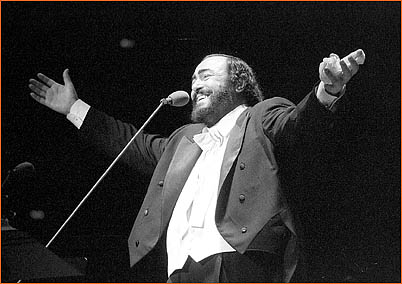 As a child, while listening to opera recordings, Luciano would sing along with tenor stars of a previous era, like Beniamino Gigli and Tito Schipa. He would also imitate the image of Mario Lanza before a mirror.

All together, Luciano sang 379 performances at the Met. 357 of them were in fully staged opera productions.

Luciano holds the Guiness record for the most curtain calls; at 165.

When Luciano announced he could not or would not learn his part for a new Forza del Destino at the Met in 1997, the house substituted Un Ballo in Maschera, a piece he was ready to sing.

Luciano cheerfully admitted to using cue cards as reminders. Words were always a problem to him.

Mr. Pavarotti’s first autobiography was published in 1981, entitled Pavarotti: My Own Story.

His second autobiography Pavarotti: My World was published in 1995

Both of Luciano Pavarotti’s autobiographies were written with William Wright.