Former Prison Break actor, Lane Garrison, has been sentenced to spend the next three years and four months inside a real prison because of a horrible and tragic choice he made.

Last December, the 27-year-old was driving under the influence of alcohol and (some reports say) cocaine when he jumped the curb and hit a tree. One of his three passengers, 17-year-old Vahagn Setian, later died at the hospital.

While receiving his sentence yesterday, Garrison stood without reaction, then was lead away in handcuffs.

“The public has the right to know that conduct such as this, causing devastation such as this” will have consequences, said Superior Court Judge Elden S. Fox.

“Unfortunately, in this case, you have to be the messenger,” he told the former “Prison Break” actor. Celebrity Mound

Are you listening Paris Hilton? Lindsay Lohan? Britney Spears? Lane Garrison is your messenger. Stop treating life like it’s as disposable as your money. Once your life is gone, it’s gone. And if you’re the one responsible for the loss of another life, your life is may not be over, but it will certainly never ever be the same.

Before sentencing, a highly emotional Garrison told the victims’ families he was “genuinely remorseful” and “sickened” by his behavior that night.

Garrison will get credit for the 91 days he has already served. That, combined with California’s Work Time/Good Time early release program, means he will likely be in state prison for about 20 months. 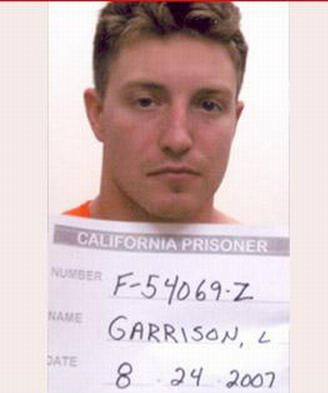