I repeat, George Clooney is not engaged.

This current rumor surrounding the star started in Italy, and was quickly picked up by Britain’s Marie Claire who then published an article entitled “George Clooney to Marry?” After that, it pretty much spread like wildfire.

It is, of course, just a rumor.

“These reports are not true,” Clooney said through his Los Angeles-based rep, Stan Rosenfield.

Will someone please tell me why marriage rumors start to swirl when a celebrity has been dating someone for a year? I realize that time is accelerated in Hollywood, but come on!

And why on earth would the perpetual bachelor George Clooney all of a sudden marry someone after only a year? Seems to me like he enjoys being single, and I hardly think he would give it all up after only 12 months.

Sure, Sarah Larson may be the first of George’s “lady friends” to walk the Oscar red carpet with him, but I wouldn’t really consider that an indication of an impending engagement.

So who is this Sarah Larson chick, anyway? All I really know about her is that she’s younger than I am, and that makes me want to hurl. Not from disgust though – it’s more of an envy vomit; like a verp, but not.

The little information there is about Sarah Larson states that she is a past winner of Fear Factor, and that she was presented as a Go Go Dancer from Las Vegas while on the show; she is also said to have been a cocktail waitress. 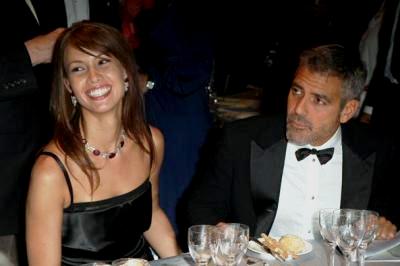