I’m only reporting this story because it speaks to the hilarity of Hollywood and the conclusions that people jump to.

Mariah Carey was seen with Nick Cannon and a big phat rock on her left finger, so naturally the two are engaged. No wait, they eloped and are actually married.

But beware, and take the rumor with a grain of salt; this is Hollywood you know. After all, Mariah Carey has a new album out and desperately wants to beat out Madonna – I’m just saying.

…there is evidence at least the engagement may be real. Earlier this week, Carey, 39, was seen sporting a large ring as she and Cannon, 27, held hands at the bash at Cadillac Lounge at Tenjune after the premiere of her movie Tennessee at New York’s Tribeca Film Festival… People Magazine

Ooh, they were holding hands! That’s such an obvious sign of an engagement, don’t you think? I mean, everyone I know who has held hands with someone has gotten engaged to them.

…If this story is to be believed, they got married in the Bahamas, Da Brat was at the ceremony, and there was no prenuptial agreement because “there was not enough time.”

If Mariah Carey really did marry Nick Cannon without a prenup, the woman is dumber that I thought. And I thought she was pretty dumb to begin with. 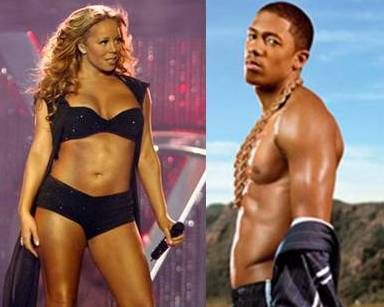