Home
Hollywood Gossip
Today Is The Day For Bicycle Accidents In Hollywood.

Ok, ok, so the accidents took place in New York and Spain, but the victims are fairly “Hollywood.” Lance Armstrong was banging Kate Hudson for awhile, after all.

Matt Lauer was M.I.A. from the Today show today as a result of dislocating his shoulder this weekend when he was thrown over his handlebars after a deer jumped out in front of him. And by jumped out I mean waiting for Matt Lauer to come into view then darting down the hill and across the road.

Can we say animal conspiracy? They’re coming to get us people; it’s just a matter of time. Remember the swine gang?

Meanwhile over in Spain, 7-time Tour De France champion Lance Armstrong got caught up in a multi-bicycle accident during the first stage of the bike race Vuelta of Castilla and Leon.

He was taken by ambulance to the University Clinic in Valladolid where it was determined that he fractured his right collar bone; he will most likely require surgery.

Lance Armstrong was at the 5-day race in Spain as part of his cycling comeback; he is riding with Team Astana. According to his team’s leader, Johan Bruyneel, Lance Armstrong has a clean fracture without complications and should recover quickly; the message was sent by way of a Twitter feed. Ah…technology. 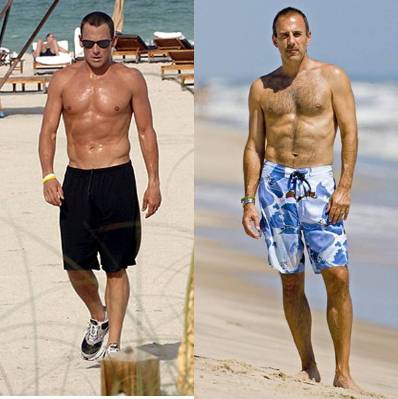