This is some crazy ass @@@@. And it all happened in the town where I live!

It’s nice to see your town’s name in the news, but not for a horribly disgusting reason like this. It just further proves my point that as a whole, humans are despicable creatures.

A 17-year-old boy who entered the national spotlight when he ran into a health club half naked, bloodied, bruised and shackled is in Sutter Tracy Community Hospital today recovering from his many injuries.

His alleged captors Kelly Layne Lau, 30, and Michael Schumacher, 34, are each being charged with torture, child beating, false imprisonment by violence, conspiracy to commit a misdemeanor and kidnapping. Each is being held in lieu of $1.85 million bail and both are set to appear in court on Thursday.

Police are searching for another suspect, 43-year-old Caren Ramirez, a woman who has lived with the family on and off since earlier last year, according to police. Ramirez faces the same five charges as Schumacher and Lau, and there’s a felony warrant out for her arrest. Police believe she’ll try to make her way to her brother’s house in Palo Alto.

The emaciated 17-year-old shocked employees at the Tracy Boulevard In Shape Fitness Center when he hopped over the brick wall separating the gym parking lot and the family’s backyard, picked up the chain padlocked to his ankle and ran weakly to the gym foyer.

I think Kelly Layne Lau and Michael Schumacher should be hung by their toes in the center of town; right at the intersection of 10th and Central. Hang ‘em from the stoplight polls. 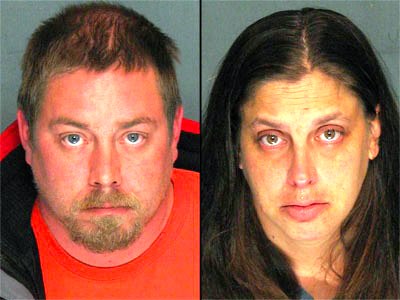