John Travolta and Kelly Preston’s 16-year-old son Jett died today while on vacation in the Bahamas.

It is being reported that Jett Travolta suffered a seizure and fatally injured himself after banging his head in the bathtub. He was taken to the Rand Memorial Hospital on Grand Bahama Island where attempts to revive him were unsuccessful and he was pronounced dead.

It’s long been rumored that Jett Travolta was autistic, but John Travolta and Kelly Preston would never admit to it; instead claiming that Jett was afflicted with Kawasaki Disease – a rare illness known to cause heart problems.

Personally I believe that Jett Travolta’s special needs went beyond Kawasaki Disease and well into the Austism spectrum. I have no problem with Jett having special needs, but I do have a problem with his parents denying those special needs because they belong to some freaky-deaky religion (dare I say cult?) that worships an alien and believes vitamins will cure mental illness. A ton of people feel the same way I do – check it out HERE. 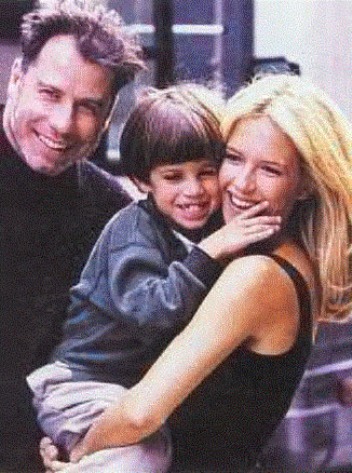 In other tragic children-dying-before-their-parents news, Lark Previn, the 35-year-old adopted daughter of Mia Farrow and Andre Priven died on Christmas Day after a long illness. Besides her parents and gaggle of siblings, Lark Previn leaves behind long-time boyfriend Robert Garcia and two daughters, ages 12 and 13. [source]

Celebrity gossip updates:
Heather Locklear took a plea deal on her DUI charge and received probation. Rumor on the Street
Dr. Dre’s son died from an overdose of heroin and morphine. [ShowbizSpy]